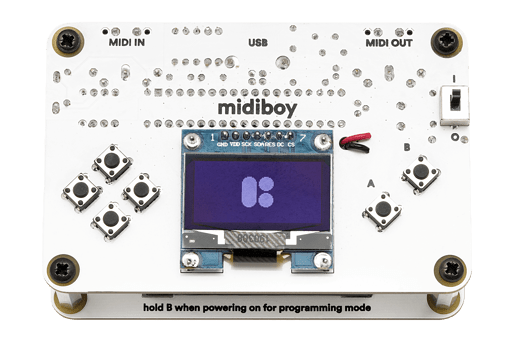 Midiboy started out as a personal project for MIDI debugging by @Giedrius that eventually turned into this little open-source handheld microcomputer with MIDI support.

Based on Arduino, Midiboy can run different MIDI effects, retro games or any other program implemented via the Arduino IDE allowing you to further expand its functionality.

It is equipped with a 1.3” OLED display, full-size MIDI input and output ports, a piezo speaker, a USB port for communication with a computer and can be powered via a 9-volt battery.

Midiboy comes in a form of a kit and as you have to assemble it yourself you will learn about electronics, soldering and programming in the process.

You can get one now at https://blokas.io/midiboy/

We will be creating more sketches for Midiboy as we move along, if you have any ideas for, e.g. MIDI effects you would like to see ported, let us know.