Skip to content
Don’t own a Pisound yet?
Get creative with our low-latency stereo sound card and MIDI interface for Raspberry Pi.
Grab one here! 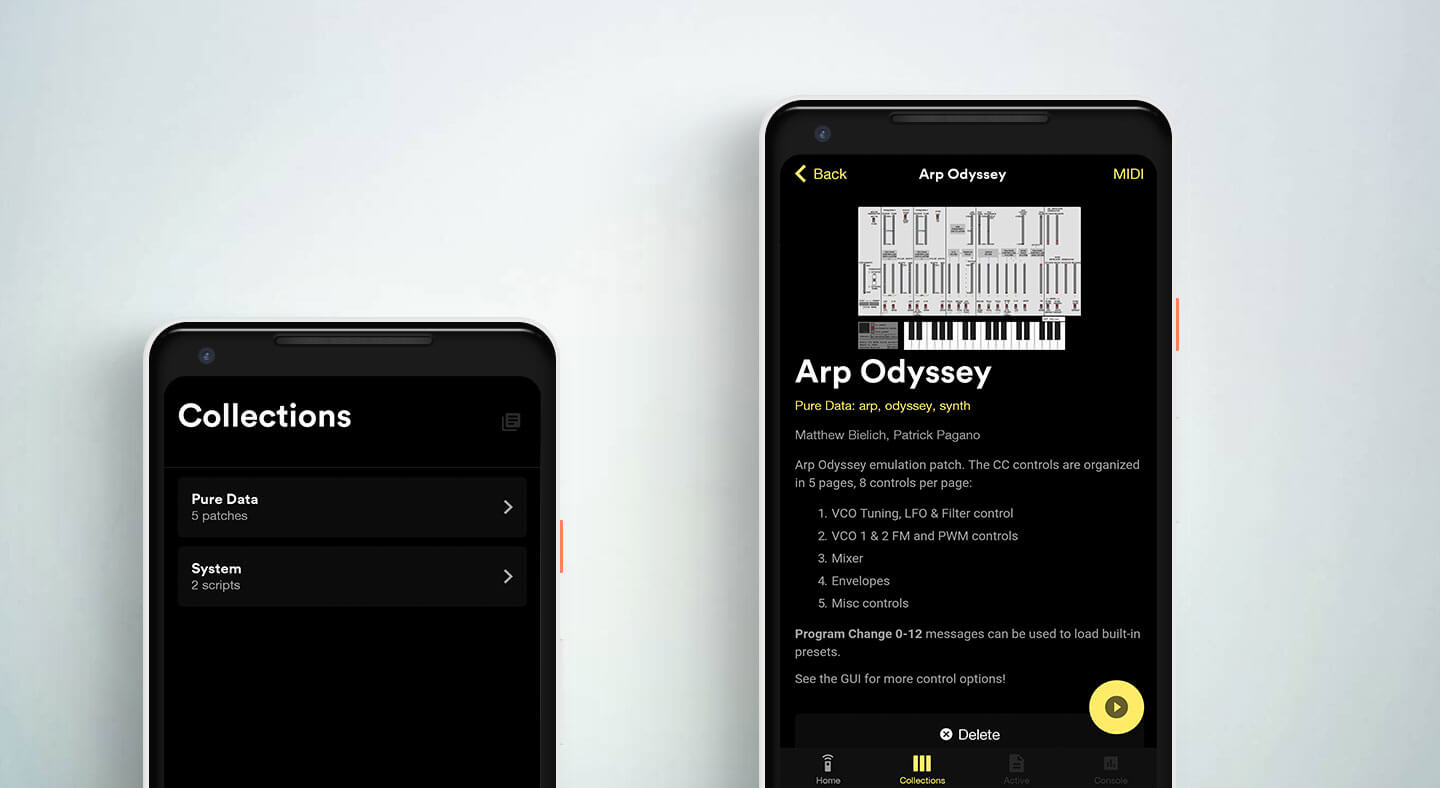 The Pisound mobile app provides an easy way for you to control your Pisound-based project with your smartphone or tablet. The app communicates with a dedicated server running on Raspberry Pi & Pisound via Bluetooth. It is called Pisound Control Server (pisound-ctl).

Furthermore, since version 1.03, the app's Pure Data module has an integration with TheTechnobear's MEC software, that means the Pure Data patches may have parameter controls whose values can be modified within the app, they can be used for display feedback from the patch to the app, and are MIDI mappable to external MIDI controllers! Read more about Pure Data module here.

The stdout and stderr outputs of the launched application are displayed in real time, informing the user on what is going on with the running application.

New modules may be added to support launching patches/scripts on more software, see the Customization section for more details.

First, make sure that Pisound is set up and that pisound-btn --version says it’s 1.05 or higher and pisound-ctl --version says it's 1.03 or higher. If it is not, follow the install instructions on Installing The Pisound Software. The install-pisound.sh will update the software even if some previous version was already installed.

If using Raspberry Pi without built-in Bluetooth support, connect a USB Bluetooth dongle to it.

After everything is set up, pisound-ctl will get launched automatically and will be added to system auto start.

Install the Pisound app on your device here, or download the apk directly here.

Why is the Location Permission Required?

As much as we hate excess permission requests ourselves, there’s no way we can avoid requesting this one. We don’t need or store your location information. It’s required for an application to declare ACCESS_COARSE_LOCATION permission in its Manifest for the application to be able to initiate discovery of nearby Bluetooth devices.

This is a new requirement since Android OS 6.0 - a nice summary of the issue is available here. And here's some more info on the new behavior.

Connecting to the Raspberry Pi

Hold The Button on Pisound for 3 LED blinks (but less than 5 or the shutdown will get triggered instead) to make it discoverable to other Bluetooth devices. After a while (180 seconds by default), it will automatically switch off the discoverability and the LED blinking should stop. This needs to be done only for initially pairing your device to Raspberry Pi. Afterwards, if using same devices and if they weren’t unpaired, switching discoverability on is not needed, you may simply connect to the last used device. You may manually turn the discoverability off before it times out on Raspberry Pi by holding The Button for 3 LED blinks.

To connect to a new device, click 'Scan' in the initial screen and wait for nearby devices to be discovered. Once you see your Raspberry Pi in the list (usually raspberrypi unless you changed its hostname), tap it to connect to it. In case it didn’t appear in the list, make sure that it is in discoverable mode and you may pull the list down or click the button that appears at the bottom in order to manually initiate a new scan of nearby devices.

If when starting the app it had previously been successfully connected to some device, you may hit the Connect button to connect to that device.

Go to the 'Collections' tab at the bottom to retrieve the categories of items. Click on single collection, e.g. Pure Data to get a list of patches.

Currently the app comes bundled with a set of great Pure Data patches to get you started, as well as some convenience System Scripts.

Select one of the items and hit the start button at the bottom right to launch it.

The launched patch/script then can be reached in the 'Active' tab, and its console output is available in the 'Console' tab.

You may choose to delete the patch/script by clicking the 'Delete' button in the description view. A confirmation dialog will appear before the patch gets deleted. Be careful, there's no way to easily undo the action!

Clicking 'Import patches from USB' in the Home tab will run the /usr/local/pisound-ctl/usb_import.sh script. It scans the connected USB media for folders like 'puredata-patches' in the media root, and imports it to the collection on the sd card (/usr/local/...-patches).

While import is ongoing, the app will display a console. Lines that say 'Importing ...' means a brand new patch was copied over while 'Merging ...' lines mean the patch was already in the collection and that it was overwritten.

To stop the server from automatically starting on boot:

The main customizable files are located in /usr/local/pisound-ctl/.

This script is responsible for producing the list of categories supported in the app. The produced output should be paths to .yml files which describe the category.

You may add more kinds of collections by modifying this file and creating appropriate .yml file.

The category yml file describes the category of items as well as provides a couple of scripts which are used to implement particular functions.

The fields in category.yml files are:

This script should print the paths to the patch entry points or metadata files (usually the path to blokas.yml), so they appear in the collection view.

A script that outputs the metadata on the patch - usually it's enough to print the blokas.yml file for the patch, however, some more advanced uses may generate the data on the fly. YAML or equivalent JSON output is acceptable.

At the very least, 'entry' and 'name' must be produced.

--summary argument is provided when querying for information to be displayed in the Collections and Patch views, and it's omitted when retrieving the information for the patch just before starting it. This is useful in case time consuming dynamic scanning of the patch for features it supports is being done prior to being launched, so that can be skipped while simply browsing the patches list.

A launcher script for executing the item. It gets the item path in its first argument, and whatever was in 'args' attribute in the rest of the command line arguments.

The blokas.yml file describes the patch/script itself and contains info that gets displayed in the 'Patch View' of the app.

If you haven't already, you can install Pure Data via pisound-config, in the 'Install Additional Software' menu.

The Pure Data patches are expected to be found in /usr/local/puredata-patches/. Each patch should be in its own subfolder. The legacy patches require the entry point into the patch to be named 'main.pd'. The new way of including patches is to create a 'blokas.yml' file in the patch folder which stores various pieces of information about the patch, including the name of its entry point.

You may find a step-by-step tutorial on how to create a Pisound App compatible Pure Data patch here.

Thanks to integration with TheTechnobear's MEC software, real time controls and MIDI mapping in PD are possible.

When a patch gets launched, the app connects all of the connected MIDI devices to the patch host, so you may immediately interact with the system, in case it reacts to MIDI messages.

To have the parameters displayed in the app, the patch must contain the parameter definitions and load the appropriate plugin.

The Pure Data patches must contain a [monorack patch_name] Pure Data object as well as the parameter definitions, named patch_name-module.json and patch_name-rack.json, described below in the same folder as the blokas.yml file.

The patch_name part must be a single word without spaces and must match between the monorack object and .json files.

Also, for convenience, the [monorack] object has a 'refresh' button visible in PD GUI to force reload of parameter definitions without restarting the patch. If after refreshing you don't see the expected changes, check for syntax errors in the definition files.

For the virtual MIDI keyboard to appear in the app when the patch is launched, it must contain [notein] and/or [r notes] object in some .pd file in the patch folder.

The parameter definitions format is defined by the MEC Software.

The syntax is JSON, so keep an eye on the ',' symbols - make sure the last entry of the group has no trailing comma, and all else do. It's best to write it using an editor with automatic syntax error checking.

This file holds the definitions for the parameters in the module.

Each parameter array entry consists of a subarray, containing the following fields in given order:

The types fundamentally are float, integer and boolean. Some particular types imply a units suffix for display, but they are not used in the app.

The parameter in the UI will have different appearance based on the type, in case the fundamental type is:

The page entry consists of:

We'd recommend using up to 8 parameters per page, but if you use more, the page will automatically be split into sub pages. Keep in mind that there's a character length limit for a page entry, so don't put everything into a single page.

Holds preset and MIDI mapping information. Initially this file may be empty. As of 1.03, only the 'default' preset name is used. The 'default' preset gets saved when a MIDI control is mapped to some parameter. Saving and loading different presets will come in a later release.

The scripts used by pisound-ctl are hosted on GitHub here: https://github.com/BlokasLabs/pisound-ctl-scripts.

You may submit pull requests with your modifications and additions. Preferred form of new categories would be deb packages, for an example, see MODEP integration scripts.