All of the pre-installed software is configured to use the shared Jack backend, so all of it should work right away without a need to tweak the settings. If you install some new software, make sure to configure it to use Jack in its audio settings.

Below are some quick tutorials demonstrating the basic use of the included software.

It could be interesting to keep patchage running in the background, to see a visualization of the current Jack backend state and the interconnections between the software and hardware. 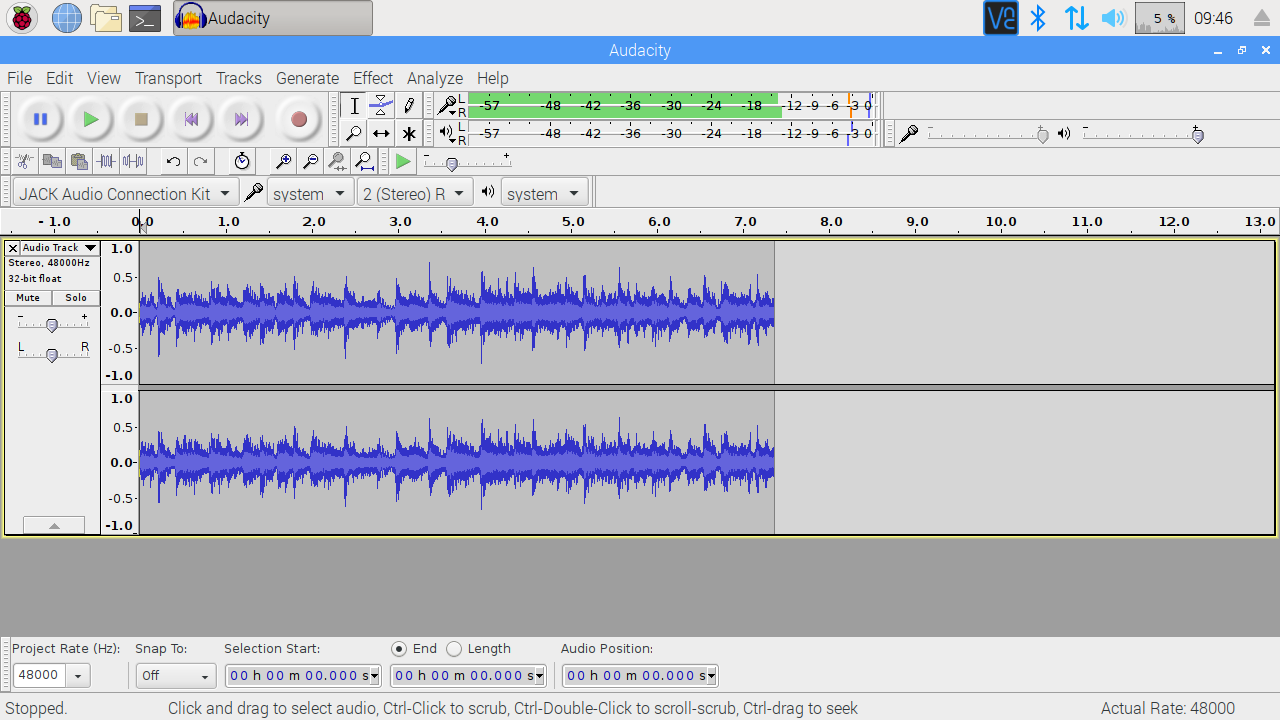 Audacity is a multi-track wave recorder/editor tool which is pretty simple to use. After launching it, just click the Record button and it will record the input ports that are available to the Jack backend. After you’re done recording, hit the Stop button, and then the Play button to listen to what was recorded.

Audacity behaves in a bit of an unusual way in the Jack-compatible software world, as it creates its Jack ports only for the duration the playback or recording is happening. That makes it a bit difficult to do custom routing in patchage. See Audacity’s Wiki for more details on its Jack integration. 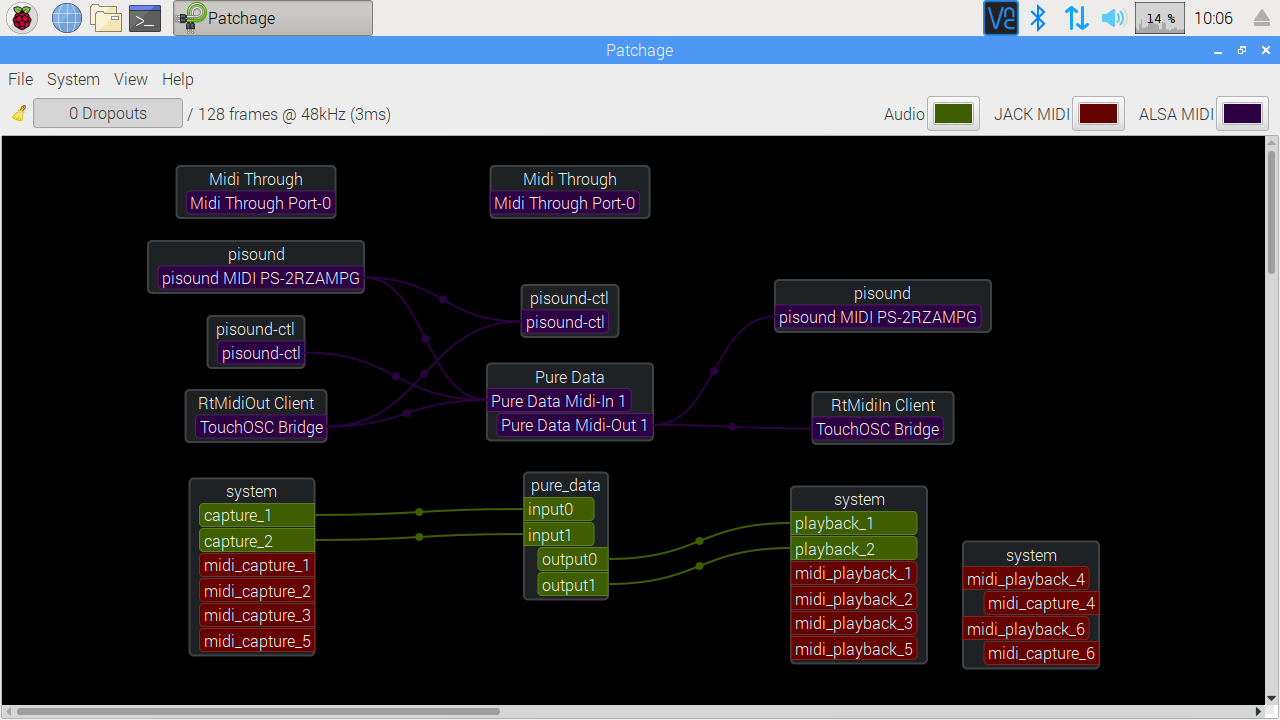 Using this tool you may cut the undesired connections and make new ones. 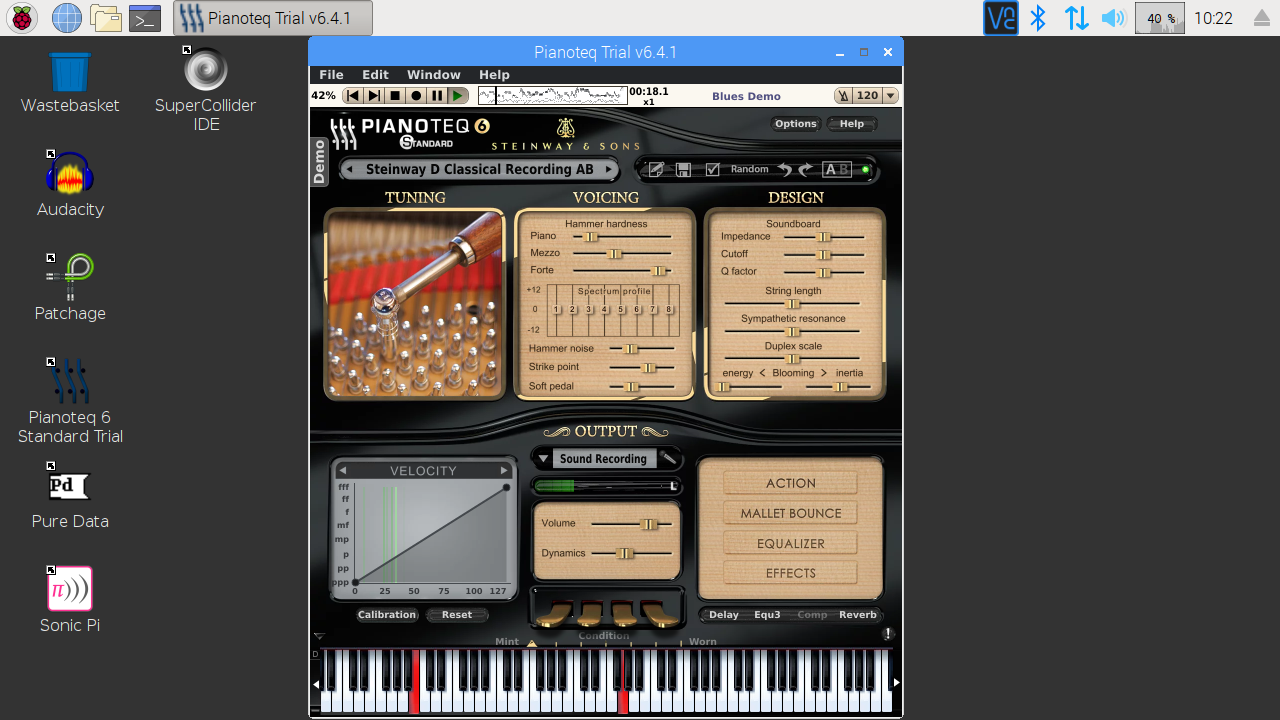 Pianoteq is a virtual instrument that reproduces acoustic sounds and playability of a real instrument by physically modeling the selected instrument. This is a trial version of the software, it has some limitations such as disabled keys, and it stops playing after some time.

Simply start the program, hook up a MIDI keyboard via USB or DIN-5 input port, and play around. Or if you don’t have a keyboard available, you can still play with your mouse using the keyboard at the bottom, or play a MIDI track using the top bar.

It is available as an LV2 plugin too, so it can be used in LV2 host software. 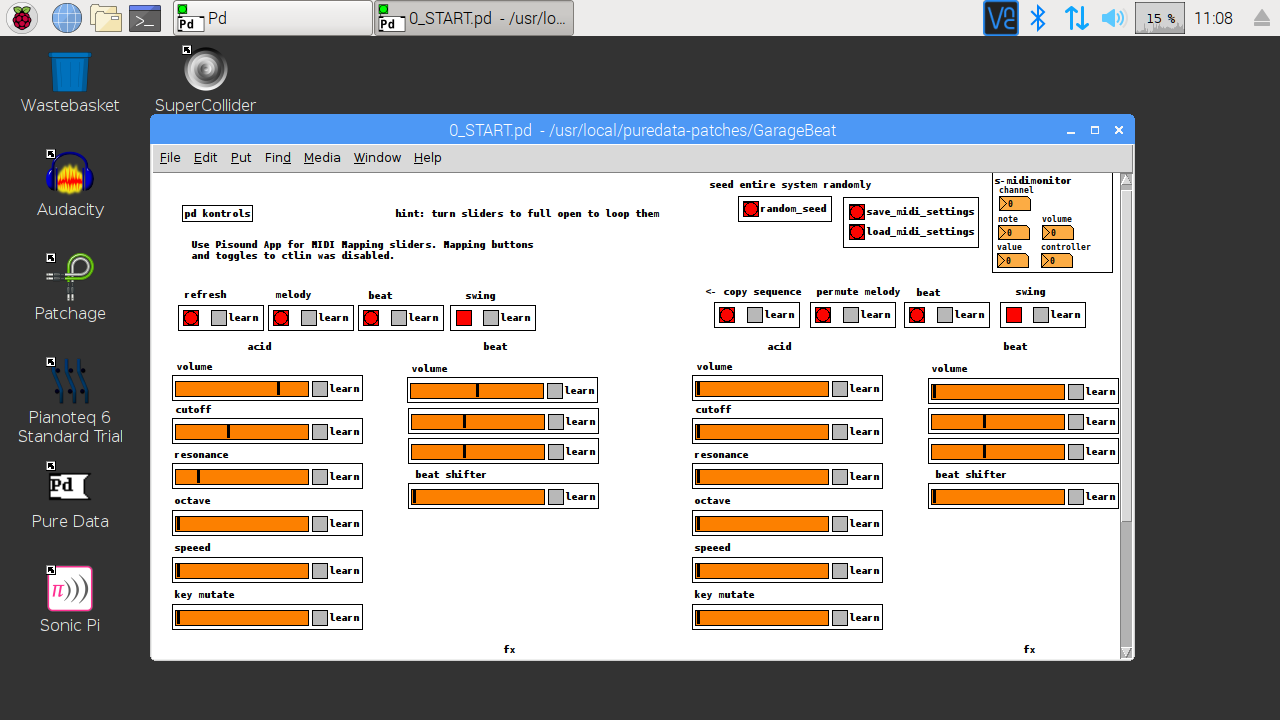 Pure Data is a visual programming language for multimedia.

The OS image comes bundled with a couple of example patches. Let’s give one of them a try - launch Pure Data, and open this file:

It is a rhythmic generative patch, you may then try playing around with the controls in the UI.

Check out the Pisound App too which has an integration with Pure Data patches, it can be used to switch between patches and control its parameters using your phone and allows integrating MIDI mappable controls. 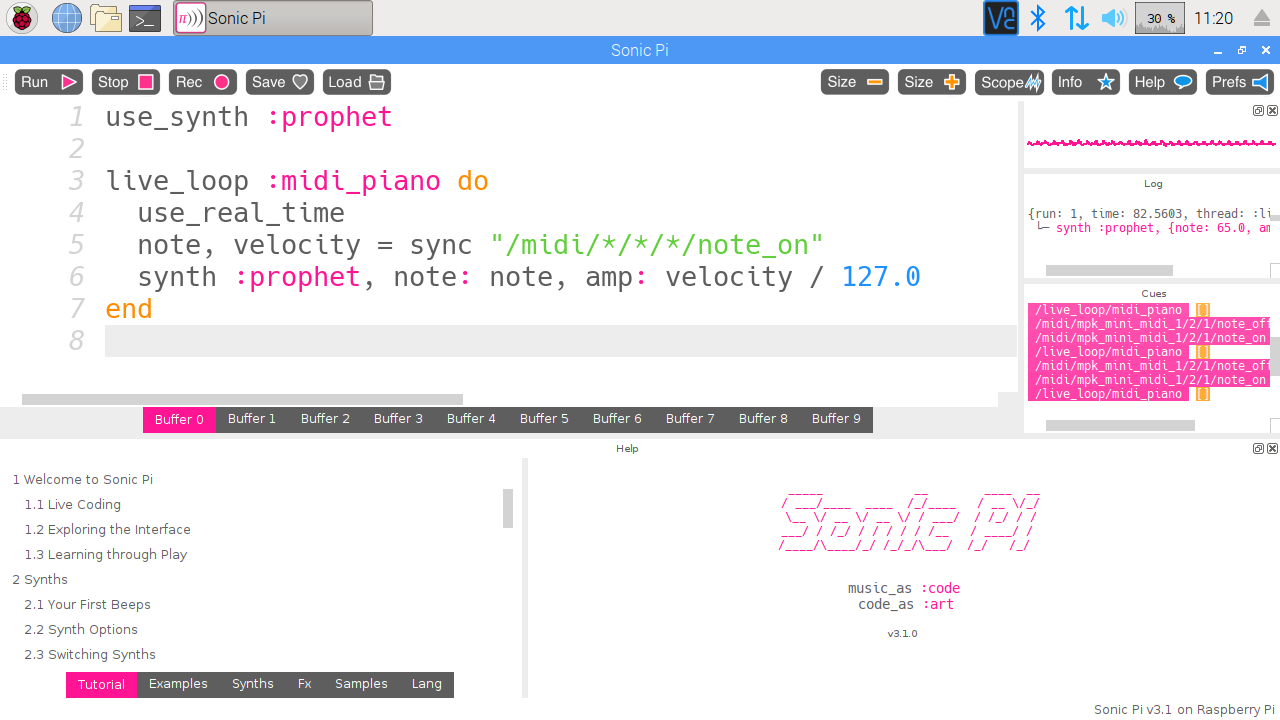 Currently unavailable, will be added as a Patchbox module in the near future, once a debian package is built for it.

Sonic Pi is The Live Coding Music Synth for Everyone.

Click the ‘Run’ button, hook up a MIDI keyboard, and play!

Check out the Examples section at the bottom area for more stuff to try out! 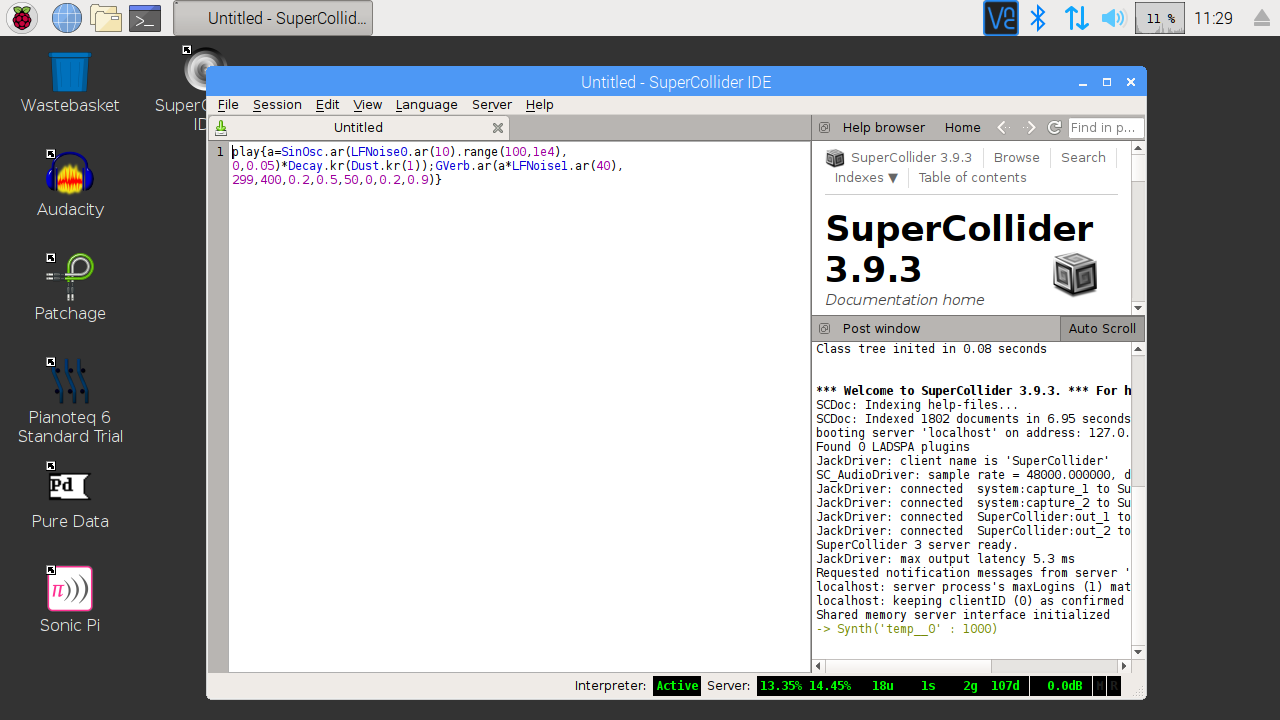 SuperCollider is a platform for audio synthesis and algorithmic composition. A lot of neat, tweet sized, examples can be found on the internet, like the one below by @joshpar. To run it, paste the contents into the code area, then do Server→Boot Server, then Language→Evaluate File.

TouchOSC2MIDI is a background process that translates TouchOSC compatible App interactions on your mobile device to MIDI messages on the Patchbox OS.

After the IP is set up, you may use the app to control audio software just as if you were using a MIDI controller.