Skip to content
Don’t own a Midihub yet?
Solve all of your MIDI hurdles and do more with your MIDI gear with our versatile stand-alone MIDI processor & router.
Grab one here! 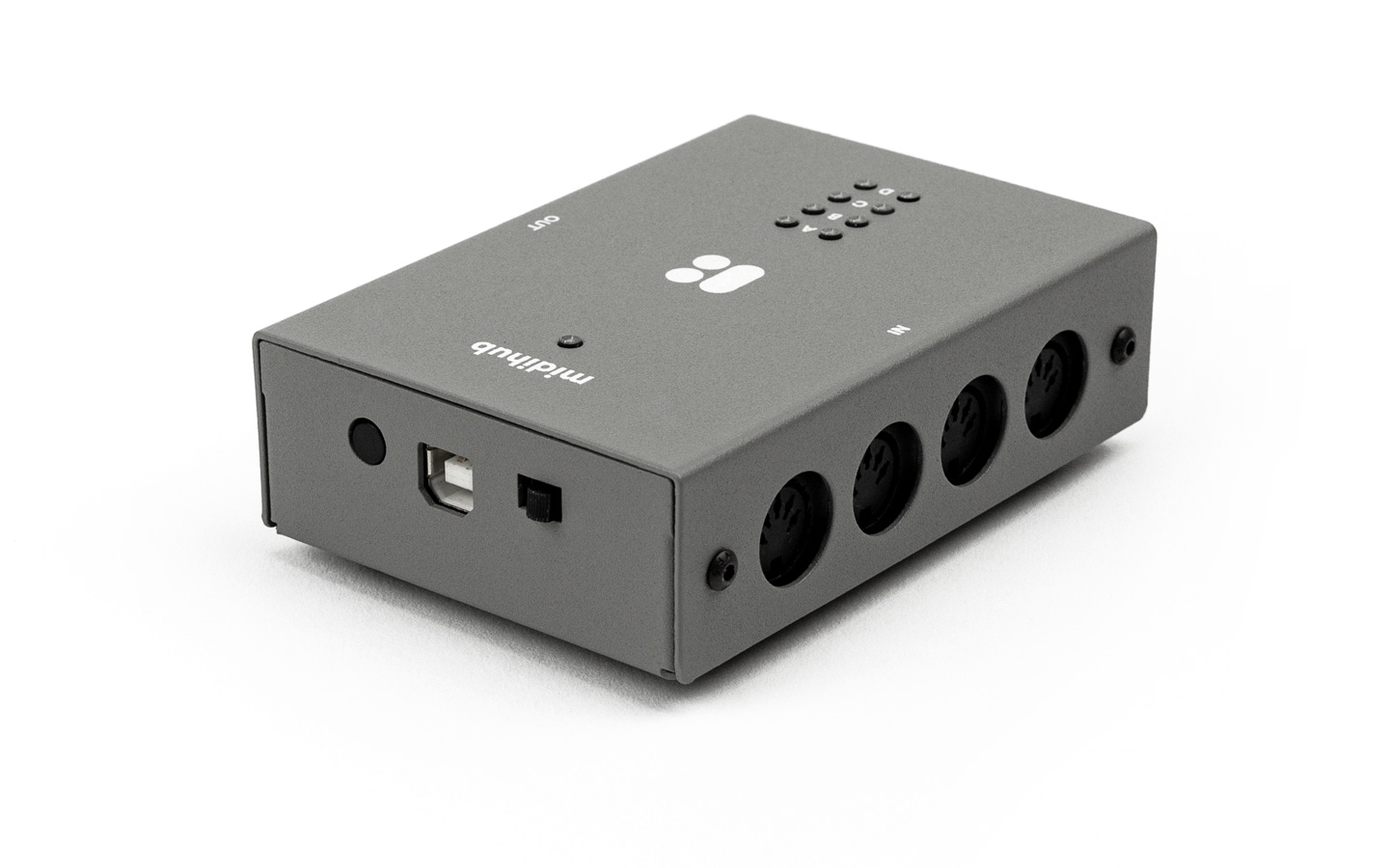 Midihub is the backbone of your MIDI hardware interconnectivity. It has MIDI DIN-5 input and output ports, 4 of each, as well as a USB port for power supply and/or communicating with the PC and its software. All MIDI data flows through the customizable MIDI Processing Pipelines within the device with extremely low latency and without involving any processing on the PC. It enables expanding the capabilities of your setup and makes interop between MIDI hardware easy.

The Midihub has 4 MIDI input ports and 4 MIDI output ports and a single USB port which provides multiple virtual cables for the communication with the PC: 4 USB MIDI inputs and 4 USB MIDI outputs, as well as an internal USB serial port to be used for communicating with the editor only. There's also Virtual Input and Output ports, 8 of each. They are used to forward the MIDI events to further Processing Pipelines. The different kinds of ports are numbered using letters A, B, C, D, E, F, G and H. The ports can be renamed in the Editor. The USB MIDI ports will appear in your OS as regular MIDI devices. Their display names are defined by the OS that is running on your PC.

MIDI controllers with only USB output can't be connected directly to Midihub, however, they can still be used with Midihub if both are connected via a USB host such as your PC or something like Raspberry Pi, the host then can forward the MIDI data coming from a USB controller to one (or more) Midihub's USB ports. The utilities to achieve this vary with the OS, but to list a few, there's 'aconnect' for Linux, 'MIDI Patchbay' on Mac, 'MIDI-OX' on Windows, and most DAWs provide the functionality to forward MIDI data between connected MIDI ports.

On power-up Midihub loads the MIDI Processing Pipelines that were stored in its Flash memory, the last stored preset. While editing the pipelines using the editor, changes remain in volatile memory only, until the pipeline is 'Stored' in Flash memory of the device via the Toolbar or Device->Store submenu. It's also possible to discard the current changes and restore the state by 'Loading' from Flash memory, via the Toolbar or Device->Load menu, making it easy to experiment with the pipeline and go back to previous state.

The Button can be configured to do one of the following actions when held down for half a second (X indicates the channel number):

The settings are stored in non-volatile memory on closing the Settings dialog using the 'OK' button.

The Midihub Editor lets you customize Midihub’s processing logic by laying down the processing pipelines using different Pipes, sort of MIDI effects. The interface is based on intuitive Drag & Drop model. Every pipeline starts from an Input or Generator pipe, from which MIDI data flows to the right, until it ends up in an Output pipe. You can play around with the Editor even without the device connected. Midihub Editor works on all major platforms - Windows, macOS and Linux! 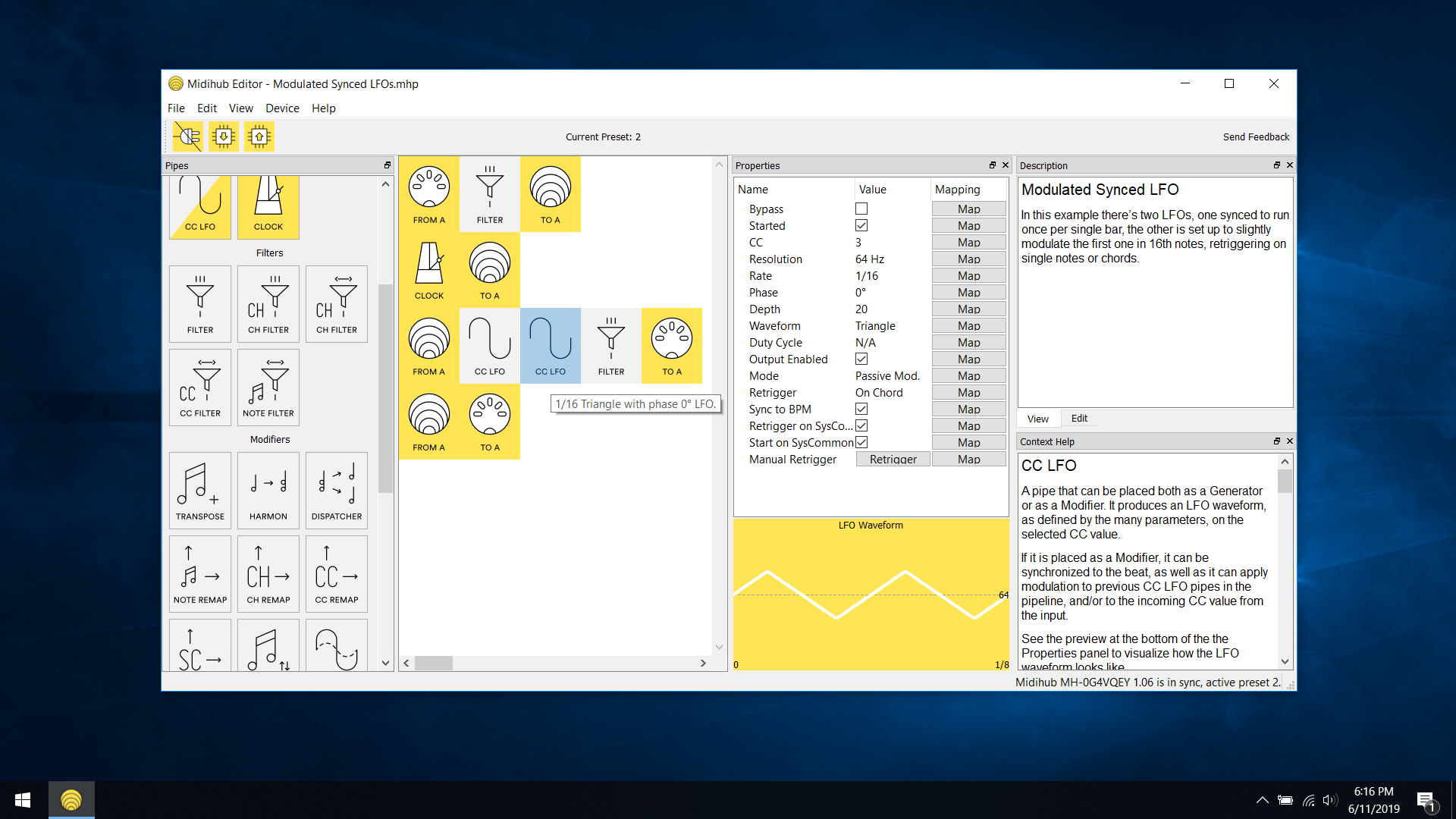 MIDI data flows through Midihub Processing Pipelines from left to right. All MIDI data enters the pipeline through the leftmost Input or Generator pipes, and exits through the rightmost Output pipes. MIDI Monitor pane can be used to see the data flow in real time. Processing the same MIDI event multiple times and in different ways is possible by making use of Virtual Input / Output ports. The data sent to a Virtual Output port will appear again in the matching Virtual Input ports, enabling implementation of keyboard splits or automatically generating chords. Pipes that modify or filter MIDI data can be placed in between the Input and Output ports. In case a pipe discards the MIDI data flowing through it, it won't be forwarded to the pipe on the right, dropping the event.

Every pipe has a 'Bypass' parameter which, when enabled, bypasses the processing of the pipe, so it passes the incoming data to the right unmodified. If the leftmost pipe is bypassed, the entire pipeline gets disabled.

Nearly all of the Pipe parameters can be MIDI mapped to external MIDI controllers. While Midihub is connected, the Map buttons next to the parameter value in the Properties view are enabled. If one of them gets clicked on, unless the operation is interrupted, the very next CC message that gets sent to Midihub will get mapped to the control. Don't forget to store the preset to memory after mapping changes are done.

Pipelines from a file may be imported into the current Preset. They may also be imported directly from Patchstorge.